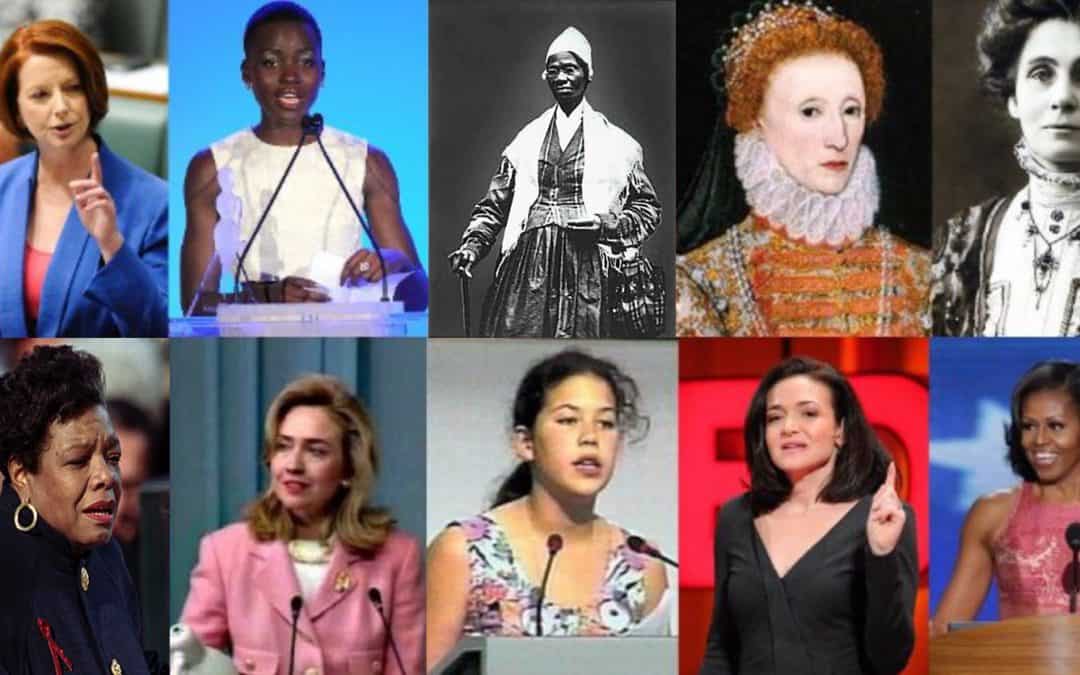 It is a sad and unfortunate reality that whenever people sit down to consider the greatest speeches ever given, the resulting list nearly always exclusively features speeches given by men, and often no speeches by women.

“Men are better public speakers!” I once heard a guy suggest, shortly before he then stuttered and stumbled in an embarrassingly flustered response to some fairly mild questioning of his assertion by those of us that didn’t quite agree. As anyone who has witnessed enough speeches firsthand can attest to, public speaking prowess does not belong to any one gender, race or religion. Nevertheless, it certainly is true that historically great speeches by women have failed to get anywhere close to the same level of recognition as comparable speeches by their male counterparts.

So, with huge indebtedness to the excellent Eloquent Women Blog by Denise Graveline, (who has compiled by far the best resource of speeches by women), here is a list of my personal top ten favourite speeches by women (and one girl!) – in reverse order. **

Perhaps because I am the father of a precocious daughter, I find myself particular attuned to speeches that address the impact of beauty on the self-esteem of young black girls. In this short but powerful speech, a graceful Lupita speaks openly and inspiringly about her experience growing up as a dark-skinned black girl in a world dominated by light-skinned beauty.

A great example of how to make a good point simply and with impact.

Best line? “Even Oprah called her (Alek Wek) beautiful, and that made it a fact!”

With this speech, you can see where and how the thinking behind her hugely successful Lean In’ movement was created. Sandberg gives an authoritative speech on gender inequality and the lack of women leaders in the corporate world, and the weight of this speech has increased over time as Facebook continues its world domination in huge part due to Sandberg’s business acumen.

Best line? “We’ve got to get women to sit at the table.”

Tricky picking speeches for which there is no recorded footage, but you only have to read the transcript of this speech to appreciate its power. Imagine a time when women had to go on hunger strikes, burn down men-only golf clubs, or get trampled to their death by horses at the Kings Derby, just to get men to pay attention.

It is this context that gives the bravery of Emmeline Pankhurst’s speech its greatness.

One passage in particular, struck me as incredibly radical yet directly on point.

What better and more attention-grabbing way for someone fighting for her rights as a woman, than to use an analogy involving babies to make a political point.

Best line? “we will put the enemy in the position where they will have to choose between giving us freedom or giving us death.”

Clinton (Hillary, that is) ain’t no Clinton (Bill, that is) when it comes to speechmaking.

Bill had a natural talent for connecting with his audience in a way that Hilary by her own admission does not have. But way back before she decided to run for President and before Monica Lewinsky was just a glint in Bill Clinton’s eye, Hillary gave a very impressive speech in China no less about the critical need to elevate world thinking about the importance of women’s rights.

Perhaps we should have known back then that what she really wanted was to be the POTUS and not just the FLOTUS.

(Halfway there. Did you sign up for the free video workshop?)

On the Pulse of the Morning – Clinton Inauguration (1993)

I suspect if any other person had delivered this poem (which is a pretty decent poem), it would have been well received, but not lauded.

The true genius of this speech lies in the delivery. That earthy rasping voice of Maya Angelou is just mesmerising. It infuses each word, each phrase, each line with such gravitas that you can’t help but be absorbed by it. She doesn’t speak or recite, rather her voice is so melodic, so beautifully rhythmic, that she is almost singing.

And very noticeably, the huge throng of ordinary men and women in the crowd – most of whom had probably not read or listened to a poem since school, watched in complete enthralled silence.

Halfway through. What do you think?

Want to see a dinosaur torn apart? Then you’re in the right place.

Frustrated at the antics of the leader of the opposition at the time, Tony Abbott, Prime Minister at the time, Julia Gillard, decided that enough was enough for all that sexism and misogyny, and stood up in Parliament to tear Tony Abbott ‘a new one’. One of the most cutting, no holds barred, blistering attacks by one politician on another you’ll ever see, and delivered with perfect poise and control.

Best line? “if he wants to know what misogyny looks like in modern Australia, he doesn’t need a motion in the House of Representatives, he needs a mirror.”

Another speech for which we were denied the benefit of seeing it in action. To quote a review of the speech by an attendant on the day “It is impossible to transfer it to paper, or convey any adequate idea of the effect it produced upon the audience.”

And yet, you can still imagine the awesome impact of seeing this tall, gaunt, dark-skinned woman in a white turban take to the stage to deliver this powerful oration to the audience of the Women’s Convention in Ohio in 1851. In many ways, this was the forerunner of Hillary Clinton’s Women’s Rights speech.

Sojourner Truth (she changed her name from Isabella Baumfree) was an abolitionist an escaped former slave, who successfully sued her former ‘master’ for custody of her son. So, you can imagine with that history, what a powerful presence she had and why she had such an impact.

I love this speech for its directness and honesty in confronting its audience with the stark simplicity of its premise: that a woman is the equal of a man in every measure.

And that refrain using the technique of anaphora (or phrase repetition) “Ain’t I a woman?… Ain’t I a woman?” It is a plea, an accusation, and an affirmation all in one.

The speech only lasted about 3 minutes and then she finished with ‘old Sojourner ain’t got nothing more to say’.

I hope she dropped the mic on her way out! Oh YouTube! Wither weres’t thou when we needest thou?

Much as I love her, I’m not sure Kerry Washington was the right person to deliver this kind of speech, but she certainly gives it the right degree of attitude!

Best line? “Then that little man in black there, he says women can’t have as much rights as men. ’cause Christ wasn’t a woman! Where did your Christ come from?”

Introducing the President at the National Democratic Convention (2012)

We all know about Barack Obama’s public speaking prowess, but it shouldn’t be a surprise that his wife, a high-powered lawyer in her own right, and his former supervisor, can give a pretty mean speech when the occasion demands.

The content and style of delivery are masterful as she straddles the delicate balance between being real and being political. No surprise then that her approval ratings have remained consistently high even whilst those of her husband have waned.

I wonder if she’s also thinking of doing the Hillary shuffle from First Lady to President.

Best line? “Being President doesn’t change who you are, it reveals who you are”

No actual video footage of this one unsurprisingly, but still one of the greatest speeches ever given, full stop.

Faced with an invading Spanish Armada from abroad, domestic challenges at home (she had just executed the challenger Mary Queen of Scots), and religious condemnation from the Vatican, who declared her an evil heretic, there was a lot riding on this speech. On top of it all, she really was a woman in a decidedly man’s world, taking on a traditionally male role, in front of an entirely male army. No pressure then!

It’s astonishing that you cannot find a full video version of this great speech online despite the many great actors that have played Elizabeth 1 including Helen Mirren and Dame Judi Dench. Here, at least, is an excerpt featuring another great, Cate Blanchett.

Best line? “ I have the body of a weak, feeble woman; but I have the heart and stomach of a king, and of a King of England too “

I defy you to watch this speech and not stop everything you’re doing until it has finished.

27 years before a 15-year-old Greta Thunberg wowed the world with her impassioned rhetoric on climate change, a 12-year-old girl stepped onto the world stage at the UN Earth Summit in Rio and made the world stop to listen.

A remarkable speech on many levels. Firstly, it’s content is powerful and filled with insightful observations about the perils facing the planet. Secondly, it is full of rhetorical flourishes that would make even the greatest speechmakers proud  – listen out for her expert use of repetition ‘I’m only a child yet…’. Finally, the poise and control with which she delivers her speech are remarkable for one so young.

It’s the perfect mix of passion and logic to sustain a compelling case.

Most impressive of all is the way she holds a room full of jaded and seasoned political world representatives transfixed until her last word. And then I love the way they all applaud with fervour like they’re the school kids and not her.

Best line? “If you don’t know how to fix it, please stop breaking it”

Is it the best of all the speeches by women (or a girl)? Probably not. Over the centuries there have undoubtedly been a large number of great speeches by women, many of which are now lost in the annals of history.  But it is my personal favourite and top of my list.

Simple. Short. Sharp. As all great speeches, including yours, should always be.

** a sad note to end on: It appears that Denise Graveline of the
Eloquent Women Blog passed away in 2018. Her site is still up and is still a great resource, which is a testament to her excellent work. Rest in peace, Denise!

If you got this far, why not keep going: “How to make an audience love you. Give them a car!”

p.s. I help execs and entrepreneurs unlock their careers by developing outstanding communication skills. If that’s you, you should check out my Communication SuperSkills workshop