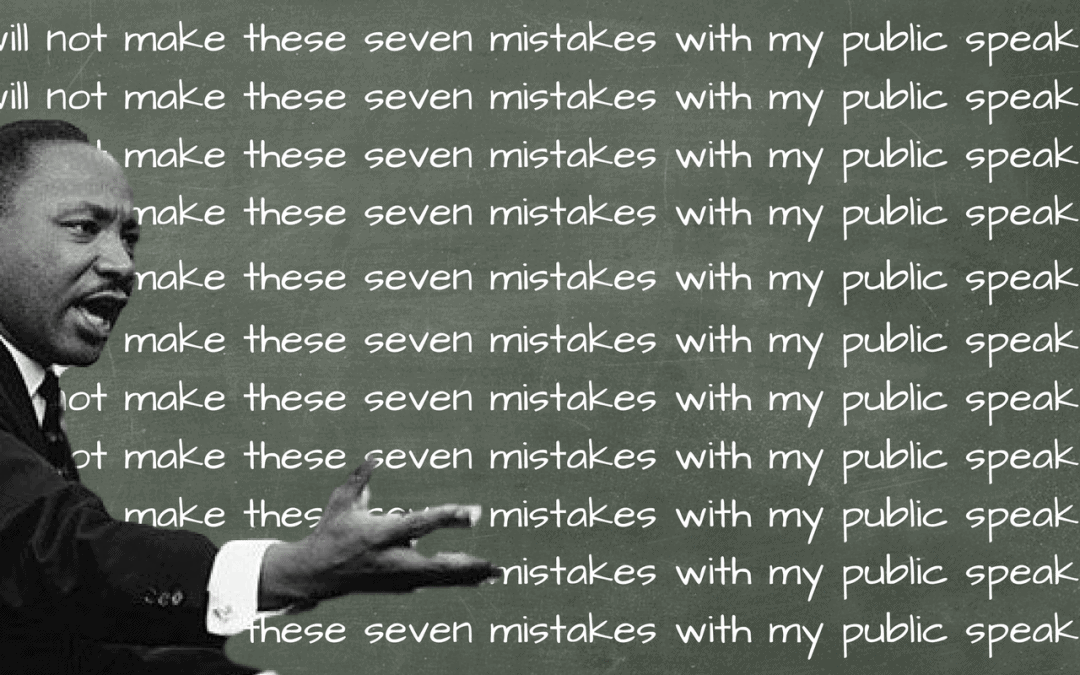 The problem with studying people who are great at what they do, is that they make things look easy.

Want to learn how to play tennis? Watch Roger Federer and you could be forgiven for thinking tennis doesn’t make you sweat and that the rackets can be wafted like wands.

Trying to cook a gourmet meal for the first time? Download a few Gordon Ramsay recipes and the descriptions will make the steps sound as straightforward as building a lego house.

But as we all know, tennis ain’t easy it does make you sweat; and you can follow the cooking instructions all you want, chances are that souffle will collapse the first five times you try to cook it.

If you want to become a great speechmaker, there is much to be said for watching the greats like Michelle Obama or JFK. They speak with effortless grace and demonstrate effective communication techniques that all of us should aspire to follow.

(The free checklist to go with this week’s article is a PDF download of these 7 Deadly Sins. Read over them before you have any speech to give) 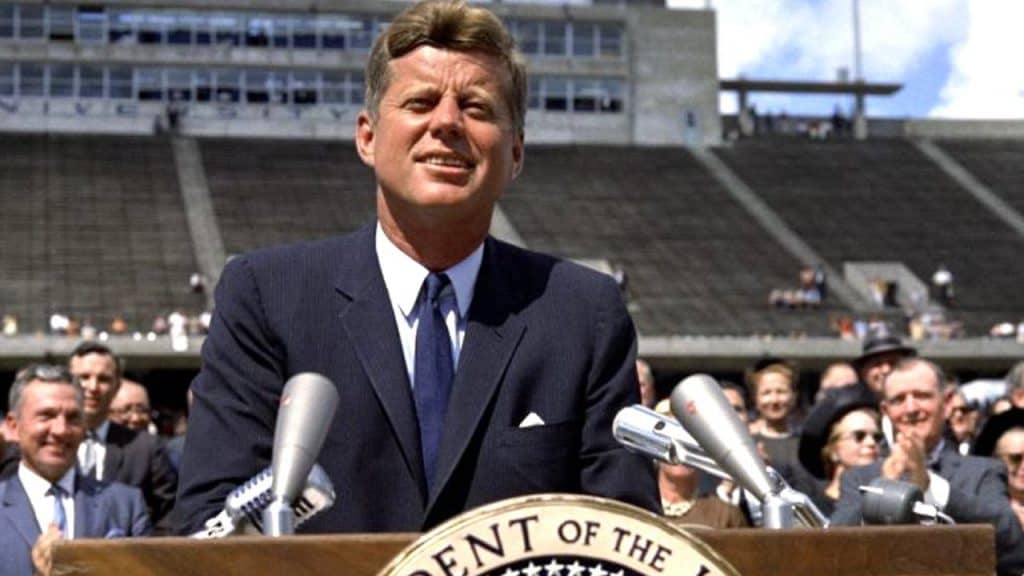 Watching great speeches is motivating and inspiring… until, that is, you have a speech of your own to give and the realities of public speaking hit home. In the real world of public speaking, soaring oratory gets undermined by your ums and errs; beautiful slides are frozen because of IT failures; and your little anecdotes that sounded so hilarious when you tried them out on your partner, fall flat in front of an audience that just doesn’t get it.

The first step to the mastery of any skill is to get the basics right. Walk before you run. And a big part of that involves avoiding basic mistakes.

In the field of public speaking there are some monster mistakes that love nothing better than taking bright-eyed bushy-tailed wannabe public speakers and reducing them to shrivelling, bumbling, muttering shadows of their former selves.

Fall into their trap and it’s your doom. But if you can dodge them and avoid their evil clutches, glory awaits… or at least a decent round of applause.

Here are the 7 Deadly Sins of Public Speaking that you must avoid at all costs:

1. I WAS JUST TOO BUSY TO PREPARE

Stop me if this sounds familiar!

You’ve got a presentation to give. You make a mental note to set aside some time to properly prepare. Then work, kids, Netflix, and general life intervene and before you know it, it’s an hour before the presentation and your sweating buckets trying to figure out what to say. 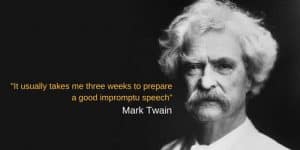 The single biggest mistake you can make as you strive to be a better communicator is to put insufficient effort into your preparation. As the saying goes: Fail to prepare and you should prepare to fail. So do yourself a favour and prepare, practise, and prepare some more.

I used to struggle to convince people about this one, until 2016 changed what all of us think about facts vs feelings. If there is any silver-lining on the whole Trump, Brexit, and other surprising election results (and I’m still not convinced there is one), it is that people now appreciate the primacy of emotions over reason when it comes to communication.

Within just a few hours of your speech, people will have forgotten most of what you said. This means that packing your presentation with facts and minute detail is pointless and counter-productive. 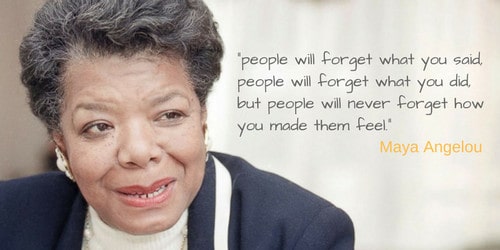 Facts are important. But feelings trump facts. If you don’t move your audience emotionally in some way, they will not engage with your speech. If you do move them, as 2016 has shown, you can pretty much say anything and they’ll buy it. Sad (as President Trump would tweet) – but true!

Stop starting your speeches with an apology!

We get it. You’re nervous. Every public speaker gets nervous. Deal with it. We don’t need to be told. More to the point if you didn’t tell us, we probably wouldn’t even notice, but now because you did, we do. So don’t!

(checklist reminder: A downloadable PDF checklist of these 7 Sins to keep next to your desk)

Martin Luther King’s – ‘I have a dream speech’. The seminal moment of the civil rights movement that changed the entire trajectory of American society: Length – 16 minutes

Abraham Lincoln’s – Gettysburg Address. You know – ‘government of the people, by the people, and for the people’. The speech that almost single-handedly established the primacy of equality and self-government in modern democracy: Length – 3 minutes

Elizabeth 1 – The Tilbury Speech. Faced with the invasion of the Spanish Armada, Queen Elizabeth had to galvanise her troops and boost morale or face the destruction of her country: Length – 2 minutes 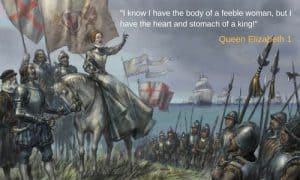 If these amazing speeches could change the world in just a few minutes, what on God’s green earth do you have to say that is so important that you need an hour to say it (or even half an hour, or even 20 minutes)?

The impact of what you say is inversely proportional to the length of time it takes for you to say it. So the longer you go on, the less effective your words.

So K.I.S.S. (which I prefer to say really stands for) Keep it short, STUPID!

And don’t think you can get round the ‘keep it short’ thing by just cramming in as many words as you can in a short space of time.

Speaking too quickly just means you give yourself less time to think, and your audience gets no chance to fully digest your words.

Silence is an underrated tool in the arsenal of any speechmaker. The Power of the Pregnant Pause is formidable. Speaking more slowly and more deliberately will infuse your words with a greater sense of authority and gravitas.

After all, who would you prefer to sound like Morgan Freeman or Pee Wee Herman?

If you give a speech without first having worked out what the purpose is, you are by definition giving a pointless speech.

The only thing worse than listening to a speech that has no point, is giving one.

Here’s a formula to keep in mind:

Don’t waste people’s time or value by giving a speech that has no point.

Have a purpose. Make your speech valuable enough to make it worthwhile to listen to you.

If what you have to say is really not worth the effort of turning up to hear it, send them an email instead!

7. Do you even know who you’re talking to? 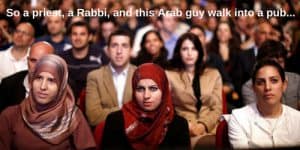 If you don’t know who you are speaking with, how will you know what to say?

Novice speechmakers will prepare their words in isolation without any real regard to the audience in front of them. Then when the moment comes, words fail to connect, jokes fall flat, and the whole speech is a washout.

Audience analysis is a big deal with many sides to it. I could give you a long list of things you should know about your audience, but when it comes down to it, there are really only two things you need to know:

1) Who is in your audience?

2) What do they currently think, feel, or believe, about the topic of your speech?

If you know those two things, you’ll be clear about how to and how not to speak to that audience.

VOILA! There it is. Seven Deadly Sins to avoid. Commit them and you will be condemned to public speaking hell – audience indifference (believe me, it hurts when you give a speech and people’s response is just ‘meh’!). Avoid them and it’s public speaking heaven – cue the applause!

Get the Free Checklist

Got it! Your checklist is winging its way to your inbox.