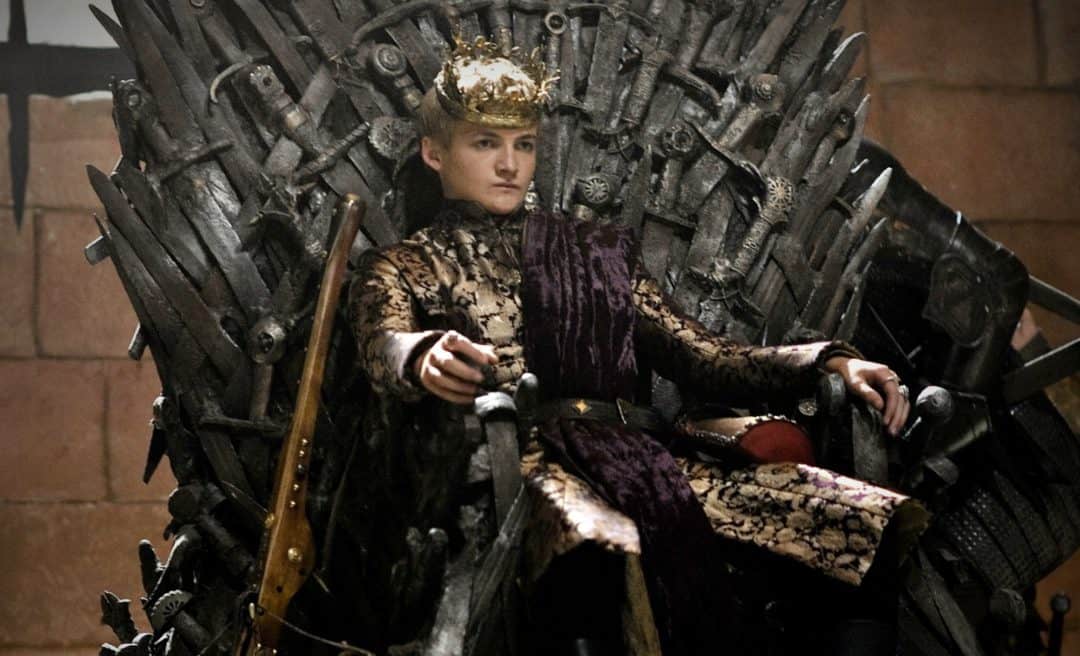 In September 2013 David Moyes took over as manager of Manchester United from his predecessor, Sir Alex Ferguson (the most successful manager in Premiership history – and that’s hard for me to say as a West Ham fan!).

Moyes took over the same team that had won the previous season’s Premiership by 11 points and promptly led them to their worst season ever, finishing 7th and more than 20 points behind the winners. It was a stark example of the direct and immediate impact of bad leadership. 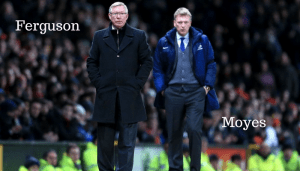 David Moyes was sacked after just 10 months, winning the title of the club’s shortest managerial reign. At one point my team, West Ham, even considered appointing him as our manager. Luckily that didn’t work out. Phew!!!

Get the Leadership Cheat Sheet

Got it. The Cheat Sheet is winging its way to your inbox as we see.

There is no magic formula or silver bullet.

The skill of great leadership is not the preserve of the rich and famous and it cannot be bought. It is not more often found in any one race, gender or culture and it is not genetically inherited. It does not correlate with physical strength or stature, and it bears no relation to handsomeness or beauty.

Gandhi. Catherine The Great. Harriet Tubman. Nelson Mandela – a great leader can emerge from anywhere, at any time, in any circumstance.

But whilst everyone loves a great leader, not every leader is great. In fact, many leaders are just plain terrible and examples of bad leadership are all around us.

As the Sudanese Proverb points out: “A large chair does not make a king”

Just because a person occupies a leadership position, does mean they are a good leader.

For every Nelson Mandela, there is a Jacob Zuma. 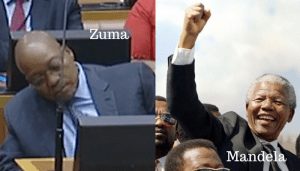 One sacrificed 27 years of his life in prison for the sake of his people; the other falls asleep in Parliament and spends £13m of public money to renovate his private home and add a pool.

For every Margaret Thatcher (and let’s ignore her hyper right-wing at times nasty politics for the sake of this article), there is a Theresa May! 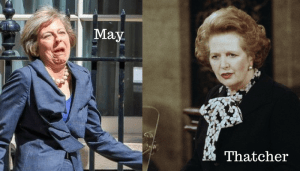 One was a famously iron-willed Iron Lady, who stood up to dictators, bureaucrats, and militants and told us she was ‘not for turning’, the other is a ‘weak and wobbly’ u-turning-before-breakfast robot with no apparent principles on which she won’t compromise. (No, Kola. Tell us how you really feel!)

For every spoilt brat Game of Thrones Boy King Joffrey, there is a dragon-rearing, empire building, slave-freeing Queen Daenerys Targaryen.

There are enough books, podcasts, training courses, and coaches out there teaching leadership skills if you want to learn how to become a great leader. But what about if you want to know what bad leadership looks like?

For those of us, that know that you can often learn more from the examples of bad ledership than the good ones, here are the four fundamental flaws of leaders that fail.

1) THEY HAVE NO VISION 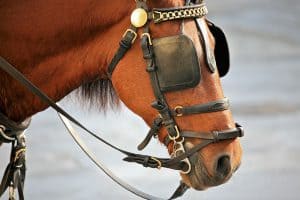 In the story of the traveller and the stone cutter, a traveller comes across a man chipping away at blocks of stone; loading them from the uncut to the cut pile. He works slowly and laboriously with clearly no love for his work.

“You look sad. What are you doing?” asks the traveller. “I’m cutting stone” replies the stone cutter moodily. “I cut one block of stone” after another after another. It’s the most depressing work I’ve ever done”.

Quickly, the traveller takes her leave of the depressed stone cutter and carries on down the road, til she comes to another stone cutter, doing the exact same work, but unlike the previous worker, he seemed to be chipping at the stone with great gusto and enthusiasm.

“You look happy. What are you doing?” asks the traveller.

One of the worst aspects of bad leadership is lack of vision. Bad leaders get consumed with the present and obsessed with minor details, which means they miss the big picture. Worse still, that lack of vision infects the team because a team quickly loses direction and purpose when there is no “why” or big mission it is working towards.

If you haven’t yet watched Simon Sinek’s great Ted Talk ‘How great leaders inspire action’ – also commonly known as the ‘Start with Why’ speech, I’d highly recommend you watch it now. If what he says comes as a shock to your system, you’ve got some vision-building ‘why are we doing this’ work to do!

2) THEY HAVE NEGATIVE PERSONAL QUALITIES

Bad leaders have negative personal qualities that have a negative, sometimes even a destructive impact on their team, organisation, or even country. 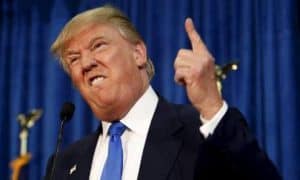 Why are negative personal qualities a problem? Because everything starts from the top.

As a leader yourself, you should ask yourself: “What are my dominant qualities? What impact is this having on my team?”

Or better still, ask your team!

Got it. The Cheat Sheet is winging its way to your inbox as we see.

3) They do not empower others 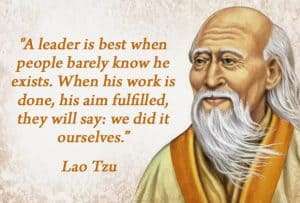 Our friend Simon Sinek also wrote a book called “Leaders eat last. Why some teams pull together and others don’t”

Similar to the quote above by Lao Tzu, Sinek’s idea is that the essence of a great leader is his or her ability to empower others to greatness. 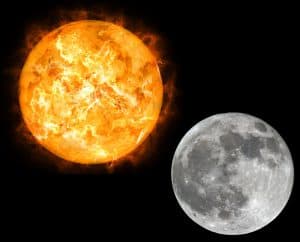 Good leaders are like the moon, not the sun. They bask in the reflected glory of their team. They don’t need to be the centre of the universe.

And you guessed it, bad leaders do the exact opposite.

Bad leaders do not inspire and they do not empower. Bad leaders want to be the sun. They do not make it a priority to build the capacity of their team members. They have no succession plan.

If something goes wrong, they are quick to pass blame. If a team member underperforms, their instinct is to criticise and threaten, rather than build that person’s capacity to improve. As a result, instead of a team of leaders, bad leaders create teams of followers, who do the bare minimum to get by, but no more.

This ‘followers but no leaders’ culture then leads to that all too familiar “Me. Me. Me” syndrome. You know: “if you want a job done right, do it yourself”; and “it’s done right only if I do it myself”; and “if I wasn’t around, this whole thing would fall apart”

Bad leaders convince themselves that everything will fall apart unless they are there, and that myopic self-centeredness becomes self-fulfilling. Everything really does fall apart as soon as the bad leader isn’t around because they made sure that everything depended on their presence.

As the Ugandan proverb goes:

“Without a leader, the ants are confused”

In 2015 Leicester City Football Club were facing a new season in the Premiership after having only just escaped relegation the season before. Their team was full of low key average players led by an unheralded manager, who had previously been sacked from his job as the manager of the lowly Greek national football team. Whilst other teams were owned by Russian billionaires, Chinese conglomerates, and Arab Oil barons, Leicester City were a comparatively poor team with 5000/1 odds of winning the Premiership. 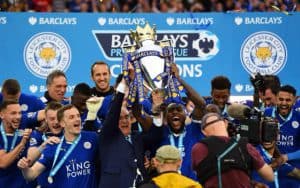 And yet they won!

In probably the greatest sporting upset in history, Leicester City beat the likes of Manchester United, Liverpool FC, and Chelsea to win the Premiership for the first, and probably only time in the history.

And their entire success was based on one simple quality: Team Spirit!

Leceister City never gave up. They played for each other as though their lives depended on it. If playing another team with ridiculously talented and skilful players, they overcome them through the sheer force of their collective will. It was no surprise to anyone when they not only won the Premiership, but also the prestigious BBC Sports Personality Team of the Year 2016 title.

Great leaders understand the importance of fostering a great spirit within their team. They know that a team with a strong spirit is greater than the sum of its parts. Its members will break through walls for each other, and when the going gets tough, a team with a great team spirit really gets going, because as they say:

But of course, those naughty bad leaders have no concept of teamwork.

There may be no ‘I’ in teamwork, but there certainly is a ‘Me’.

Bad leadership focuses on fostering allies to shore up their position. They ignore,  tolerate or even encourage splits and factions; and when the going gets tough, a bad leader’s team runs for the hills.

Leadership is a tough game.

It doesn’t make sense to make it any tougher by being bad at it.

These are the four fundamental flaws of leaders that fail.

Fortunately, even if you have one or even two of these flaws (and I won’t tell you which two were mine as a leader), you can still recover and grow to become a better leader. It starts with self-awareness and then builds from there.

So close the doors, grab a mirror, and do some serious self-analysis. Don’t worry if you don’t like what you see. The first job of a leader is help people grow, starting with yourself!

p.s. if you are ready to start working on the essential communication skills of a good leader, book yourself in for a free strategy session with me