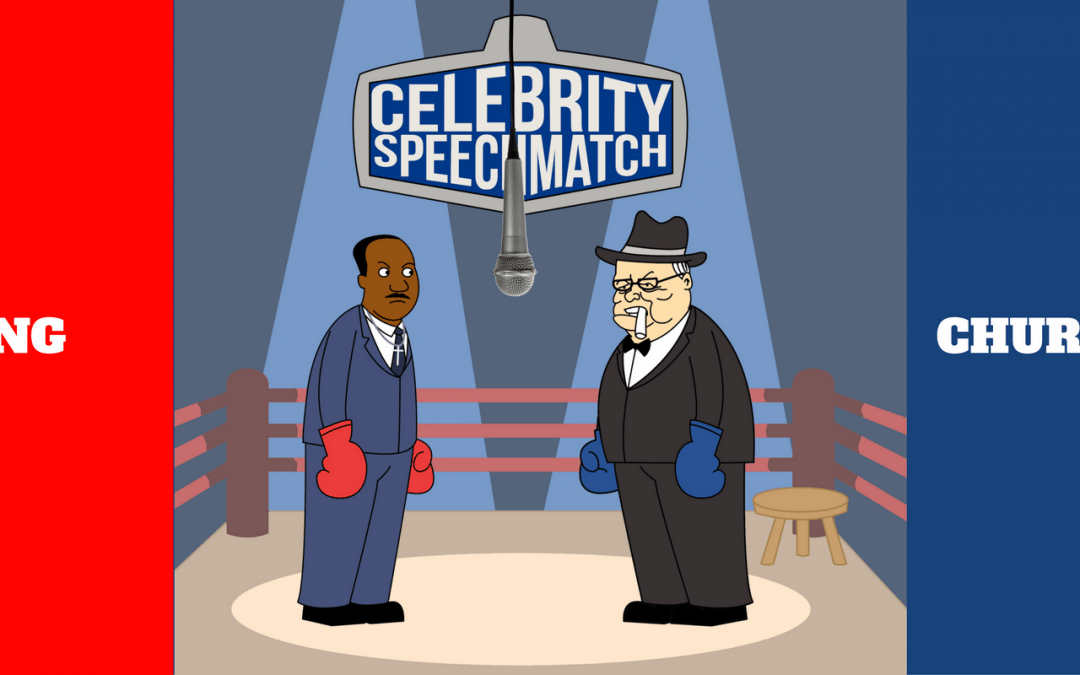 In the Red Corner: Martin Luther (The Reverend) King

Celebrity Name if they got married: ChurKing

Their Lovechild would be: Barack Obama

Best Speech (King): ‘I Have a Dream’ Speech

Best quote (Churchill): “Success is going from failure to failure without loss of enthusiasm”

Best portrayal by an actor (Churchill): John Lithgow in ‘The Crown’

Best portrayal by an actor (King): David Oyelowo in ‘Selma’

Public Speaking Scores (out of 5)

Significance of speeches: 5; Eloquence & Articulacy: 5;Use of body language & gestures: 2; Voice quality, variation & intonation: 4; Use of vivid imagery: 5; Use of humour: 5; Speaking with passion: 4; Use of storytelling: 3; Improvisation: 5; Charisma: 5

Significance of speeches: 5; Eloquence & Articulacy: 5; Use of body language & gestures: 4; Voice quality, variation & intonation: 5; Use of vivid imagery: 5; Use of humour: 1; Speaking with passion: 5; Use of storytelling: 3; Improvisation: 5; Charisma: 5

Tie-breaker question: Whose best speech is most often referenced throughout the world?

Answer: Martin Luther King “I have a dream”

King wins on points (but some cry fix and demand a rematch!)

There is pretty much nothing to choose between those two great public speakers. Both highly eloquent, both excellent at using imagery to bring their words to life, both gave hugely significant speeches that basically changed the course of the world.

You’d have to give Churchill a big advantage on humour on account of his legendary wit which helped him get his audience on side with ease, whilst there is little that comes to mind in this regard for King. But King shaves it on passionate oratory, gesturing & body language and voice variation.

With equal scores, we were forced into a tie-breaker, simply judged on the significance and influence of their most famous speech on the rest of the world and on this, I think the ‘I have a dream’ speech wins quite comfortably. It is the most referenced speech in history, and all the more remarkable because the ‘I have a dream’ part of the speech was not even scripted but improvised.

There really could be no other choice on their hypothetical love-child though: Barack Obama combines the two men almost perfectly in many elements.

One thing for sure, ChurKing are two of the greatest, if not the greatest ever speech makers in history.