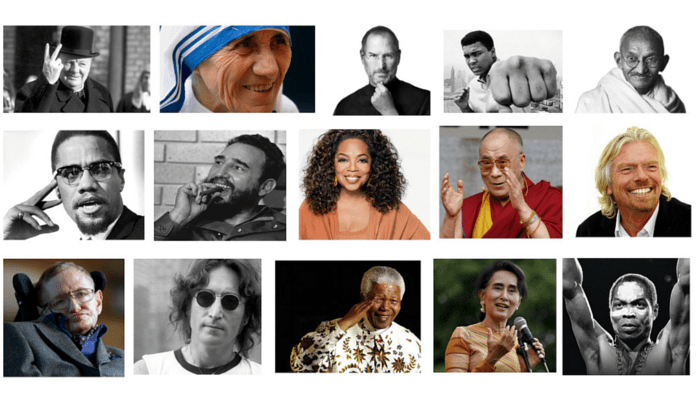 Difficult to describe and impossible to define, still we know it when we see it.

It’s the man with the magnetic aura that shifts the dynamics of any room he enters without saying more than a few words; it’s the woman with the easy charm that gracefully disarms detractors and turns them into advocates for her cause.

We love to listen to charismatic people. We give greater consideration to their words and greater weight to their deeds.

And there’s no one single mould that encapsulates charisma because charismatic people come in all shapes and sizes. They are male and female, tall and short, conventionally attractive and downright odd-looking.

Some are hyper smart with impressive MBAs, others flunked school and work on instinct alone. Many are lovable; others we love to hate.

But like them or loathe them, we cannot deny the magnetism they seem to have that draws others towards them, making them dominate their immediate environment often without seeming to try.

Steve Jobs had it (they called it his ‘reality distortion field’). Mother Teresa had it despite her diminutive stature. Stephen Hawking has it, in spite of his physical debilitations.

Everything is easier with Charisma.

It’s the h0ly grail of communication, like rocket fuel for your words. It’s the secret shortcut between an audience’s initial uncertainty and their total persuasion and conversion to your way of thinking.

So does that mean you are either born with it or not? Is this a quality that forms part of our genetic makeup and DNA? Or is charisma something that can be acquired and developed?

Fortunately, for all of us, it’s the latter.

As I said, charisma is like magic. That’s a good thing, because magic isn’t really magic at all, but a simple skill that anyone with the discipline and willingness can learn to apply to mesmeric effect.

Sure, there are those that are born with a natural magnetism, but for you and me, who are not movie stars, famous singers, leading politicians, or titans of industry (although power and charisma very often do not go hand in hand), charisma is something that we can learn, acquire and improve on to serve our own personal needs.

So here are the 5 Habits of Highly Charismatic People that anyone can use to become a charismatic communicator:

(this article is written in direct response to requests given to my short 3 question survey from my readers about the topics they’d most like me to cover on public speaking and communication. Got anything you’d like to hear about? Take thesurvey here.)

1. Talk more about others than you talk about yourself

In a previous article, I was a little hard on Dale Carnegie’s view about how to structure your speech. But Carnegie (author of the seminal work ‘How to win friends and influence people’) certainly knew a thing or two about charisma. His message was simple:

We may think that people with charisma are very self-centered, (and many probably are) but look and listen closer and often you’ll find that in any given situation, they talk more about others than themselves.

Typically, they will listen as much, if not more, than they speak and prioritise asking questions over making statements.

They’re the ones that make others feel like they’re the only ones in the room because despite distractions and pressures of time, they still give undivided attention to whoever they are speaking with at any given moment.

I think quote merchant, Robert Brault, summed it up best when he said:

So, to develop your own charisma profile, suspend your own ego and focus on others. Even if talking about yourself  in an Elevator Pitch for instance, make it less about what your business does, and more about how it serves and helps others.

In your conversations, make meaningful eye contact with the other person; remember their names; listen empathetically, sympathise sincerely, and praise and complement unhesitatingly. When you ask someone how they are, follow up with pertinent questions that show actual interest. Seek out and highlight the achievement of others whenever possible. Show interest in the things that matter to them, not just you.

It’s the simple law of reciprocity.

When you treat people like they are special, they’ll think of you and treat you as special, right back.

So Rule #1 – Make others the center of attention and they’ll love you for it.

Negativity is a big turn off. It brings everyone down.

People prefer positive people. They are nicer to be around and more pleasant to listen and talk to.

So Rule #2 is pretty straightforward: Be Positive!

When you speak, speak with positivity (even when the topic is difficult or unpleasant). Seek out the upside, and communicate the possibilities over the obstacles.

It’s the glass half full as opposed to the glass half empty approach to life. It makes others feel good, which means they’ll want to be around you more.

People with a purpose in life are more interesting than people that drift.

We sense their urgency and focus and it’s entrancing, even if we have no personal interest in their particular goal.

It’s the great irony of Bill Gates’ life that despite being at one point the richest man in the world as founder of Microsoft, it is actually only since he became a great humanitarian and philanthropist that people actually now think of him as a charismatic figure. Now, he gives Ted Talks and is constantly feted and quoted, where previously he was always seen as a distant second to his more illustrious nemesis, Steve Jobs.

There is little more engaging and impressive than a person with a clear sense of mission. It seeps through their pores and their enthusiasm is infectious. People around them feel their passion and it is intoxicating.

Particularly for leaders, managers, directors and entrepreneurs, there is nothing more likely to inspire and influence others than their perception or great purpose within you. When you’re on a mission, your words have a greater intensity. They resonate deeper and carry greater weight. People with a sense of purpose appear much more authentic and sincere and credible.

So Rule #3 – Be on a mission and your audience will pay attention.

4. Be yourself and be vulnerable

Which is more interesting? A crisp white perfectly symmetrical Ikea table, or an 17th century antique dresser full of chips and with an uneven finish?

In a social experiment now known as the Pratfall Effect, psychologists identified the following proposition: competent people are considered more likeable when they make a mistake over when they are perfect.

As long as you are generally considered competent, the surest way to get people to feel emotionally connected to you is to be yourself. Be human, including being open about your imperfections.

Don’t try to sell people on yourself or present what you think to be what they want to hear. People can always spot a fake!

Think to the public’s adoring reaction to the famously inscrutable Andy Murray when he cried after losing the Wimbledon title. In one moment he went from general respect because of his undoutbed skills and abilities, to the nation’s darling – all in the space of a couple of tears.

Vulnerability is a strength, not a weakness when it comes to charisma. It’s why even superheroes are always created with character flaws or weaknesses. It makes them much more interesting.

So Rule #4 is to be yourself, whatever that is. Sincerity and authenticity are far more effective and interesting to people than bland perfection.

You’ve been invited to give a Ted Talk on the theme of ‘good and evil’. You prepare a detailed speech with great slides to ram home your central message about Karma and how doing evil deeds tends to rebound. You are convinced that your audience will be impressed. Then you get the Ted Talk Play Book and notice that their first recommendation is that you tell a story.

So, you tell this one:

“Once upon a time there was cruel king, who made a new law saying that his people that they would not eat until they had built him a new palace;  but instead of building it from the bottom up, they would have to build the palace from the top down.

The people pleaded with him but he would not relent. Architects, engineers and builders studied the problem and concluded that it could not be done. But still the king would not change his mind.

Instead he announced that anyone that laid a single stone from the bottom up instead of the top down, would be put to death. No exceptions.

And so his people starved.

Then the people asked an old man, who had once been lawyer to the king, to plead their case. The old man consulted some old law books then made his way to the king. After just a minute whispering in his ear, the king suddenly changed his mind, and declared that he no longer needed the palace after all. He ordered the law to be revoked and let the people eat again.

After the people had made merry, they found the old man and asked what he had said.

The old man replied “I simply reminded him of the old law that whenever the people built a palace for the king, it was for the king to lay the first stone! And that if he did not do so, then by his own law, he must be put to death”

Which do you think is more likely to engage the audience?

Everyone loves a good story.

Stories, proverbs, and anecdotes  all have the power to carry meaning and messages within their narrative. It’s why we remember lessons from parables like The Good Samaritan, or Aesop’s fables, or even Disney movies like Cinderalla and The Lion King.

The ability to tell a good story is a great tool of the charismatic speaker. It marks you out from other speakers, who tend to have a very functional approach to public speaking.

The key is being able to draw on the right story at the right time and to do this, there is no other alternative than to work at it.

Gather your stories, and anecdotes and file them in your memory to be used whenever the occasion allows. Think about stories from school, or incidents at work, your first kiss, the worst day of your life. Study examples of great historical figures or moments in history that teach relevant lessons today.

If you find it difficult to tell stories, start with short quotes, proverbs and sayings – these are short snippets of wisdom, which very often encapsulate fantastically complex messages in simple and succinct form.

The more of such stories, quotes and anecdotes you have to hand that you can draw on, the more others will see you as a person worth listening to.

So, Rule # 5: Be a storyteller whenever occasion allows.

So, there you have it!

5 Habits of highly charismatic people. Pick one and see. If it works, try another!