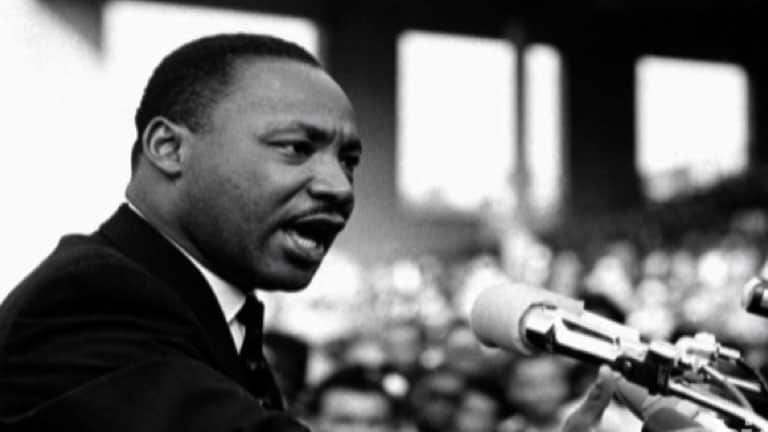 It was a perfect speech.

Almost every technique in the book was used, from anaphora (repetition of a word or phrase for emphasis), to references to the Bible and Shakespeare. It was delivered to an audience of 250,000, which included such figures as Charlton Heston, Sidney Poitier, Sammy Davis Jr, Burt Lancaster, James Garner and Harry Belafonte, Marlon Brando, Josephine Baker and Paul Newman, and thousands more on television.

Following the speech, Martin Luther King was marked out by the FBI, who observed that “…in the light of King’s powerful demagogic speech yesterday he stands head and shoulders above all other Negro leaders put together when it comes to influencing great masses of Negroes. We must mark him now, if we have not done so before, as the most dangerous Negro of the future in this Nation from the standpoint of communism, the Negro and national security”

And yet for all of that, the single most remarkable fact about the greatest speech in modern history is that the words for which it is most famous, were not meant to be part of it at all.

King had written the speech the night before apparently (and uninspiringly) titled: ‘Normalcy, Never Again”. Significantly, the draft did not include the now iconic “I have a dream” passage, and was by all accounts a good, but not brilliant, and definitely not his best ever speech.

Certainly, the text of the draft he had written had some wonderful elements to it: “Five score years ago” reflecting the opening of Abraham Lincoln’s Gettysburg Address; incredibly vivid turns of phrase like “we refuse to believe that the bank of justice is bankrupt”; politically explosive concepts like “the fierce urgency of now”.

But then it happened. Knowing that he had more to give and that the audience was not being captivated as it should be, his friend Mahalia Jackson, standing behind him in the group of other speakers and performers, prompted him as congregations often prompt baptist ministers.

“Tell ’em about the dream, Martin!” she shouted out. Martin heard, set aside his text, grabbed the lectern and proceeded to “go to church”.

The speech burst to life and the rest of course is very well known history:

“Let us not wallow in the valley of despair, I say to you today, my friends. And so even though we face the difficulties of today and tomorrow, I still have a dream. It is a dream deeply rooted in the American dream.

I have a dream that one day this nation will rise up and live out the true meaning of its creed: “We hold these truths to be self-evident, that all men are created equal.”

I have a dream that my four little children will one day live in a nation where they will not be judged by the color of their skin but by the content of their character.

I have a dream today!”

It was a passage he had used a few times before, but in the moment, in that place, on that day, it was as if he had created and given America a new sense of purpose and destiny.

He continued, fully warmed to his theme:

“And so let freedom ring from the prodigious hilltops of New Hampshire.

Let freedom ring from the mighty mountains of New York.

Let freedom ring from the heightening Alleghenies of Pennsylvania.

Let freedom ring from the snow-capped Rockies of Colorado.

Let freedom ring from the curvaceous slopes of California.”

The power of his incredible oratory and ability to invest his words with deep sincerity were so moving, they still resonate powerfully 50 years on.

His ending, my personal favourite passage, was classic in its use of the technique of closing with a meaningful and apt quotation:

“… when all of God’s children, black men and white men, Jews and Gentiles, Protestants and Catholics, will be able to join hands and sing in the words of the old Negro spiritual: Free at last! Free at last! Thank God Almighty, we are free at last!”

At just over 1,600 words, spoken by a man without even the right to drink from the same water fountain as a 5 year old white child, the impact of this speech was electrifying and tectonic.

It was the greatest speech in modern history. Appreciated both in its time, and probably for all time.

And yet, for all the many great things that have been and will be said and done to mark that watershed moment, we should all spare a thought for Mahalia Jackson and her presence of mind to prompt her friend to rise to greatness.

But for her, we might still be living in a world without great dreams!