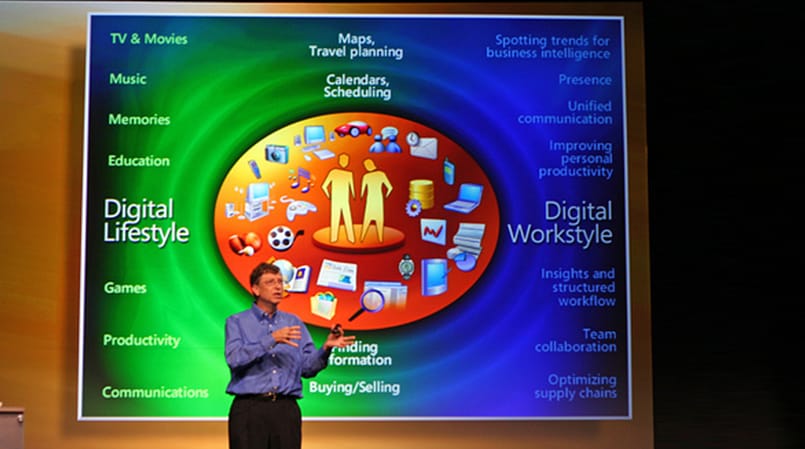 You walk into the meeting room and you notice the white screen pulled down, projector on, and middle manager Johny stands beaming with clicker in hand. Suddenly it dawns on you… It’s yet another one of his PowerPoint Presentations! 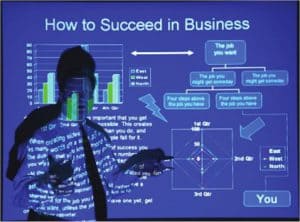 Let me be clear. There’s nothing at all wrong with the technology. As a piece of software, it’s powerful and incredibly versatile. But there’s a reason they coined the phrase Death by PowerPoint.

Think about it. You’ve got a presentation to give. What’s the first thing you think about? Chances are it’s about your slides. What should I put in them? How many should I have? What kind of graphics do I need? Before you’ve even written a word of your presentation itself, you’re already thinking about font choices and whether you should go to the venue with your own laptop or just a USB stick with your PowerPoint Presentation already loaded up. 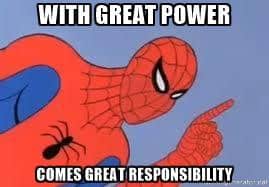 But before we before we start, promise me you’ll do 3 things before you even power up that laptop to start preparing your PowerPoint.

(if you need help with your communication skills, why not book yourself in for a first session https://www.greatspeech.co/book-a-call/)

PRINCIPLE 1: Use PowerPoint as a Sword, not a Shield

If you read a few of my articles, you’ll learn that I love my film references, and I’m a sucker for a good warrior movie.

So, let’s try a good warrior movie analogy. Say you’re a Spartan warrior facing overwhelming odds, do you just sit back in defence, waiting for the large army to encircle and eventually defeat you, or do you force the issue and get on the attack?

Yep. You know the answer! 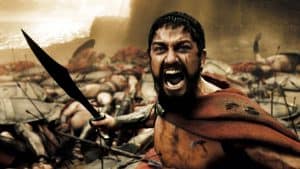 PowerPoint is best when it is used not as a shield that you hide behind, but as a sword with strong images to drill home your point.

When presenters spend all their time designing slides with lots of texts and complicated charts, they then proceed to direct all the audience’s attention to their slides instead of themselves as the presenter. You’ll hear them say things like “I know you probably can’t read everything the slides say but…” and then three things happen:

When used well, PowerPoint enhances what a presenter says by reinforcing or emphasising the message they want to give to the audience. A great visual might give a graphic representation of the points you make verbally.

There’s no better example of how to use PowerPoint as a sword than in the best Ted Talks like Tim Urban’s great talk on procrastination. Focus in just on the slides he uses and how they bring home the point he is making:

When you give PowerPoint Presentations this way, it supercharges your talk. This way you will find:

So use PowerPoint to make your point with power. Do not let it overpower you! And if public speaking makes you nervous, here is one thing to help you overcome that

So let’s say you’re giving a short presentation on something really dry, like the quarterly performance of the engineering team of a microprocessor-manufacturing plant. Is that boring enough for you?

How many slides have you seen that look like this? 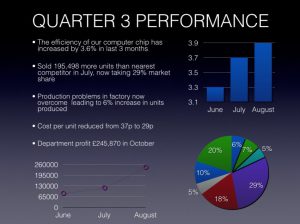 When your slide is cluttered and full of text, graphs, charts etc, it makes it hard for your audience to understand, which means you have to spend more time explaining the slides and reading the information already on there.

The more information you shove into a slide, the less digestible it is for your audience. 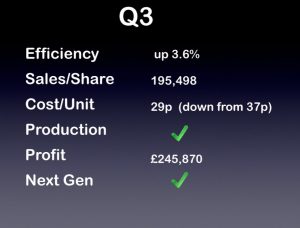 It’s less cluttered so easier to read. But even so, there’s still lots of text that your audience will have to read; and if they’re reading what’s on screen, they are not engaging with you.

We’re back to the shield problem. So, let’s improve things. 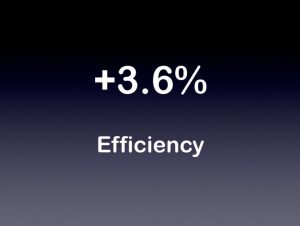 Here, we’ve stripped everything away except just one statistic.

Rather than overwhelming the audience with all the details in one slide, the manager takes one key result and puts it front and centre on the slide. (Apparently, there has been a 3.6% increase in CPU efficiency whatever that means).

Although this means you’ll need more slides, it has the advantage of cementing your point in your audience’s mind, without overwhelming them with too much detail. But still, we can do better!

The importance of a 3.6% efficiency increase is the impact it has in improving the user experience. So, how about an image to accompany the statistic? 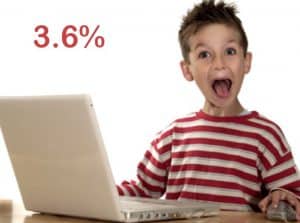 This slide is much more effective! It’s clean, focused and impactful

Bullets should stay in guns. There is no need for them on your slides.

You would think that Mr Microsoft himself, Bill Gates, would have been a master PowerPoint user. They invented the damn thing after all!. But no. Turns out Mr Gates uses a metaphorical AK47 to pepper his slides with bullet points.

Can you believe these slides?

(Ironically, he is much better nowadays since he left Microsoft!)

Here’s an alternative. It’s called the TITLE & Detail approach and there’s not a bullet point in sight.

The Title goes on the left with the detail on the right.

Since people’s attention tends to be drawn to whatever is largest on a slide, be sure to capitalise or increase the font of the most important information.

There’s still too much info on this slide but at least there aren’t any bullets.

Meanwhile, if you’re ready to supercharge your career by transforming your communication skills, book yourself in for a first session https://www.greatspeech.co/book-a-call/)

PRINCIPLE 4: Save the tricks for the circus.

You know how it happens. You start playing around with PowerPoint and you come across a cool feature, like the Swoosh bouncing letters effect or the Thunder & Lightning transition effect. Suddenly, you lose a couple of hours exploring what other features you can use.

PowerPoint is a tool. It is a means to an end. It should never become the primary object of your focus.

Lots of special effects (flying text, bouncing images, whooshing sounds) just means that your audience will stop focusing on your actual message, turning the slides into a distraction, instead of an enhancement.

Save the tricks for the circus.

If you find yourself spending more time on special effects than the effect of your message, you’re in trouble.

There is no substitute for practice – however good you think you are.

You are aiming for a smooth and easy delivery. You want (wo)man and machine to almost be like one, where your words, delivery and slides just flow. This takes practice. Until you rehearse, you won’t know how well your slides will work.

Take a leaf from the late Steve Jobs. He was the unrivalled master of the keynote. His introduction of new products have passed into legend for their brilliance. He was the best business presenter of his generation and guess what… Steve Jobs was obsessed with practice. He practised each keynote for hours and hours, perfecting his delivery, the sequence and timing of slides, the level of the lighting. 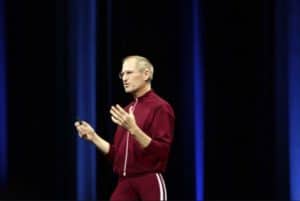 PowerPoint – the clue is in the name. It is a powerful thing. Either you control it, or it will control you.