The Greatest Star Trek Crew Ever 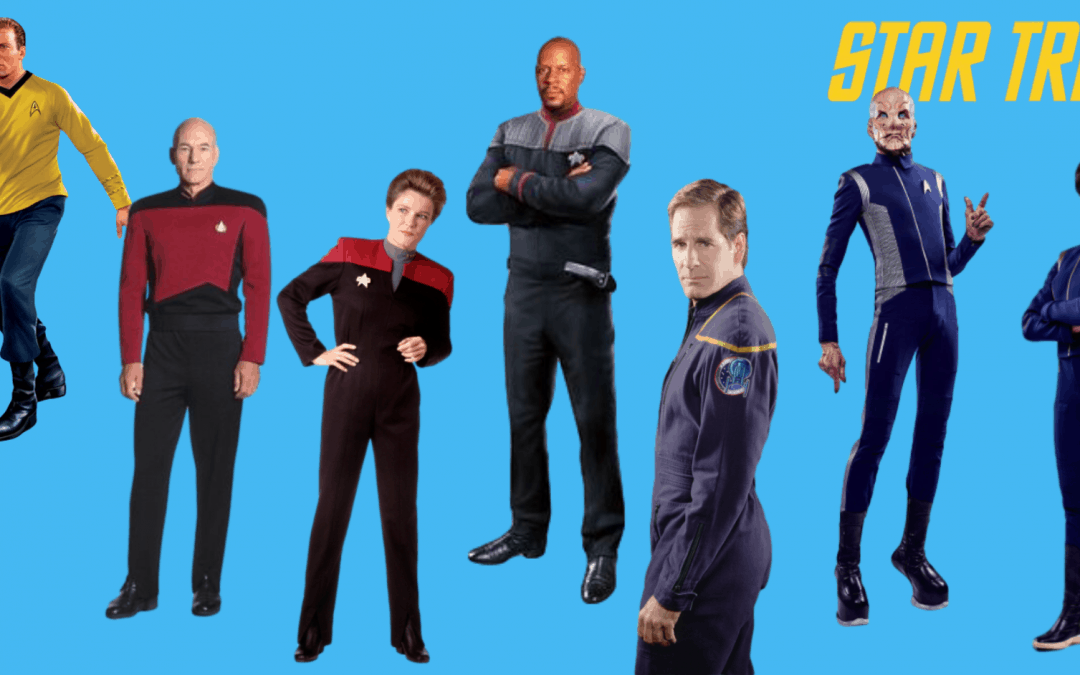 “Star Trek was an attempt to say that humanity will reach maturity and wisdom on the day that it begins not just to tolerate, but take a special delight in differences in ideas and differences in life forms” Gene Roddenberry (Star Trek Creator)

If you don’t accept that simple fact, leave now and never come back because you and I cannot be friends.

Look past the funny looking aliens, meaningless technobabble, and cheap MDF sets, and you’ll see that this remarkable Sci-Fi phenomenon has engaged in quite possibly the greatest exploration of humanity ever presented on the small screen. 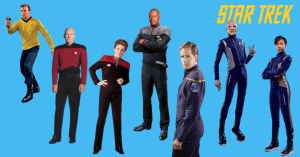 Each race from the Andorians to the Vulcans (there’s no race beginning with Z that I know of) represents a different facet of mankind:  our emotions; different political philosophies: the dichotomy of science vs art; religion and spirituality and much more.

Each episode spotlights a different human dilemma (good vs evil; love vs hate; fear vs bravery; logic vs emotion etc) and then sets out a decidedly human answer to help viewers navigate those dilemmas in their own lives.

In short, the world of Star Trek is a microcosm of the world. And the myriad of Star Trek characters that have been featured across the 8 different TV series (not to talk of the movie spin-offs) represents the full gamut of humanity.

But who of all those great characters would you pick to form the best Star Trek crew ever?

Here are my picks. Notice there are no characters from Enterprise (because I never got into it) and Discovery (because I think it’s not yet found its feet).

Contentious, but this is about leadership.

Janeway is a true leader – authoritative, but compassionate; instinctive but considered; fearless but cautious.

Kirk was great, no doubt, but at little too maverick and self-absorbed to take the top spot. Picard is most people’s choice for the top spot, but brilliant as he was, he struggled with empathy and was too often unable to provide the emotional support his crew often needed. This is a negative when compared with Janeway’s maternal warmth and feminine charm that often disarmed even the most intransigent of staff member. Sisko (who I loved for his gravitas) was just too cool for school and probably suffered from the overall weakness of Deep Space 9; Archer – No. And much as I think Saru as the lone non-human Captain is endearing, he doesn’t;t really get a look in with this high calibre crowd.

No one else comes close to challenging Spock for this role. Half-human, half Vulcan, his intense cold logic barely masking his burning emotions (which revealed themselves in surprising moments of levity and compassion). Spock is exactly what you need in a right-hand man.

No one messes with a Klingon. Bravery personified. To be fair, his tactical advice tends to be focused on attack and battle, but what else do you need in a tactical officer? He has displayed more than enough ingenuity to make him an indispensable crewman to any captain.

You can’t beat a shape-shifting changeling when it comes to security. Handy to have a guy that can basically change into any form you need at any moment.

You need someone to bring a sense of fun and mischief to life amidst all that seriousness, and who better than a materialist Ferengi Bar owner. (Although Neelix from Voyager would be a good stand-in.

A brilliant pilot, but his inherent recklessness requires good management. Too controlling and you stifle his creativity, give him too much freedom and he could endanger the whole ship. Sulu from the original series might seem the more obvious choice, but Tom is the superior pilot and you need your best person in a position like that.

Look beyond the tight-fitting fan-pleasing catsuit, and it is obvious that Seven’s experience in the Borg collective, her natural tenacity and alternative mindset, make her the perfect tactical officer. Once you’ve been into battle with a stock of nanoprobes, you’ll never fight without them again.

More than just a doctor, Bones was always ready to challenge Spock’s cold logic, ensuring that all decisions went through the filter of a caring human so the captain could take a more balanced view.

You never know when you’ll need a self-important hologram with delusions of grandeur to send into harm’s way.

Inventor of so many great engineering techniques (like teleportation at warp speed), his ingenuity is sure to offer his captain great options for both fight and flight.

The android who would be human. Whilst he valiantly struggles to perfect his smile and identify the essence of humanity, the massive gigaquads of processing capacity in his brain (plus the strength of a machine) gives the crew the benefit of a walking talking supercomputer during away missions.

Her name was derived from the Swahili word, Uhuru, meaning freedom. She shared the first on-screen interracial kiss with Captain Kirk, and Martin Luther King Jnr once persuaded her to stay on the show when she was considering leaving. Such heritage guarantees her a place on this great crew.

Brought into the original Star Trek series to offer a younger fresher perspective, you’ll always need a brave brash youngster to throw into the mix.  His Russian origins amidst a distinctly American crew helped represent the unity of nations that creator, Gene Rodenberry believed would be achieved by the 23rd century. Here’s hoping! Special shout to Ensign Harry Kim (actor Garrett Wang) from Voyager, who never got the promotion he richly deserves (despite amassing more experience than the typical lieutenant), but co-hosts the excellent Delta Flyers podcast with Robert McNeill. 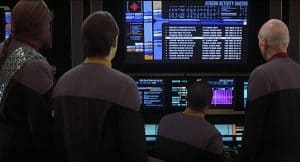 Despite being just a programme, its personality across every series was evident.

And we mustn’t forget the villains.

Resistance is futile. How can we exclude the Borg and their disturbingly sexy Queen? She seduced Captain Picard, nearly bested Captain Janeway, helped Data feel emotion, and intimidated Seven of Nine. The archetypal Matriach!

Heroes are only as great as the villains they defeat and who better as a villain-in-chief than the vengeful Machiavellian master of wrath, Khan Noonien Singh.

Intellectually and physically superior to any human, it takes the combined strength and cunning of the entire crew of the Enterprise to defeat this Übermensch. Like all the best villains, Khan’s actions are not evil for the sake of evil, but rooted in a very human sentiment: Revenge (for the death of his wife).

A bit harsh to call him a villain maybe seeing as he never actually did any real harm to the various crews with which he interacted. But he did cause Star Fleet’s first interaction with the Borg, so he definitely qualifies as a naughty boy.

So, what do you think?

If you’re a true Trekkie, I expect you to agree with most, and disagree with some of these choices.

If you’re not Trekkie, and still don’t get it, at the very least you should be grateful to Star Trek for the inspiration it provided to a generation of supergeeks, who went on to found and lead some of the companies you depend on like Apple, Amazon, and Google, and to create some of the products you love like mobile phones, Alexa, touch screen tablets, ereaders, GPS, Google’s translator, smart glasses, 3D printing,  video conferencing, and more.

May you Live Long and Prosper!

p.p.s. if you liked this, you might like this article on Obama v Trump: who is the greater communicator?