Celebrity Speechmatch: Obama vs Trump. And the winner is… 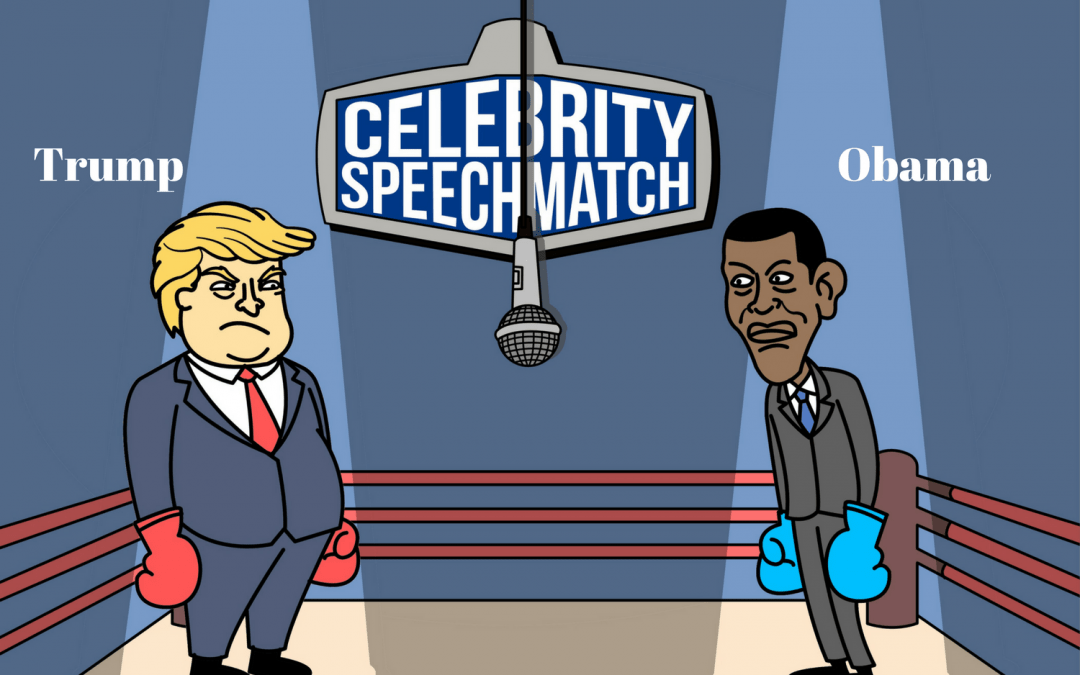 It’s the battle the world has been waiting to see.

Right up there with Ali vs Foreman; Barcelona vs Real Madrid; Serena vs… well nobody came close to Serena, so let’s go with Chris Evert vs Martina Navratilova.

Obama vs Trump. Professor vs Businessman. Socialist vs Nationalist. 44 vs 45. 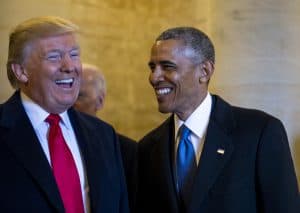 It’s the two reigning superheavyweights of the division going head to head in another instalment of Celebrity Speechmatch: Who is the greater communicator? Our last battle saw Martin Luther King taking the title on points against Winston Churchill (though there are rumours of a rematch on the cards).

(thinking of running for President or Prime Minister, best start working on your communications skills and I just happen to have a handy free communication skills workshop for you!) 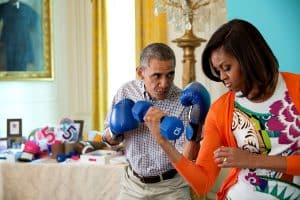 In the Blue corner: Sporting a goofy smile and those big pointy ears; he’s a one-time Senator from Illinois. He’s known for his big brain and smooth tongue. 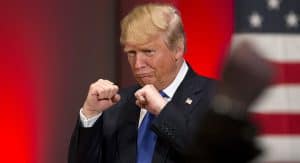 And in the Red corner: with the orange tan and blonde bouffant; he’s the former star of the Apprentice.

Author of one of the best selling business books of all time;  the man with more buildings named after him than any businessman in history; the 45th President of the United States of America: Donald “You’re fired” TRRRRUUMMMMPPPP!!!

Michelle and Melania share a slightly awkward embrace as they discuss that speech they both gave, before settling into their seats. 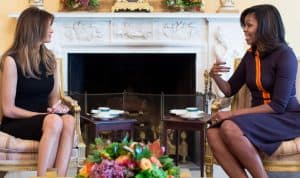 A short chant of “Barack Bomaye!” rings out on the left, which is swiftly met by chants of “U.S.A” from the right where the Trump supporters sit. There are fine people on both sides!

In the center, a surprising appearance by Hillary Clinton holding up a banner saying “Cant we all just get along?” No one is interested.

There was a short moment of chaos when CNN reported on rumours that tonight’s referee, Judge Judy, had had a secret meeting with Vladimir Putin before the fight. But she’s denied it and Obama in typically laid-back fashion is making nothing of it.

Seconds out (Joe Biden No 46 nods to his pal as Mike Pence leaves the ring without even looking at Donald).

Obama comes out with a strong right hook citing his groundbreaking “Yes, we can” speech. It reverberated around the world, he reminds us, and basically carried him to the Presidency.

The Donald struggles to counter with a memorable speech of his own and settles for his inauguration  “American Carnage” speech, which he claims was watched by more people than witnessed Jesus’ Sermon on the Mount.

Chief Justice Roberts calls this an easy win for Obama. Trump demands a recount but can’t identify what was wrong with the first count. 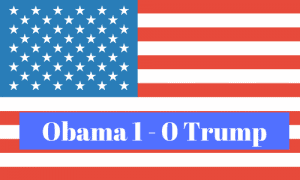 Obama first suggests that “Yes, we can” was a great message but the Judge Roberts rules that he cannot use the same argument twice so instead he plumps for “Don’t boo. Vote!”

The crowd seem unimpressed and Sarah Palin, commentating for Fox News reminds their viewers that that message “didn’t work for Clinton at the last election, did it, Barack Hussein!?”  She also says she thinks she can spot Putin from where she’s sitting, but no one else can.

Trump looks confident and calmly says “MAKE. AMERICA. GREAT. AGAIN! One of the greatest pieces of messaging of all time.” People have compared it to Abraham Lincoln’s Gettysburg Address, he claims. 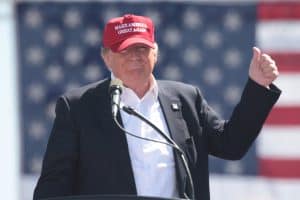 No one buys that but there’s no need for debate. Trump takes it. 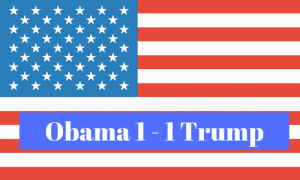 Obama objects immediately, claiming that the ability to insult is not a prerequisite for great communication. That’s a decent jab. But Trump gives the punch no time to land and jumps in to label his opponent “MOANBAMA”.

He reminds the judge of a quote by Cicero, the second greatest orator of all time (second after Trump of course) Cicero said “When you have no basis for argument, abuse the plaintiff!” 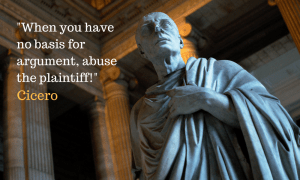 The ability to put your opponent down is a key debating skill, he argues and then he lists some of his greatest hits including:  “Little Marco, Rocket Man, and of course, Crooked Hillary”

Chants of “Lock her up!” ring round and Trump reminds the judge that that was one of his too.

Chief Justice Roberts offers Obama a right of reply but the only insult he can remember is “basket of deplorables”, which is quickly discounted since, as Judge Roberts reminds him, “that one belonged to Crooked… I mean Hillary Clinton”

A few people in the crowd notice that Hillary has left the building. 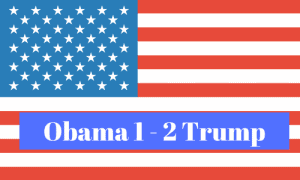 Trump is quick off the mark in this round. “No one does passion like me”, he suggests and he cites as proof his three wives and many affairs to Obama’s one wife, no girlfriends.

Judge Roberts quietly informs Trump that we aren’t talking about that kind of passion.

A few people in the crowd notice that Melania has left the building. 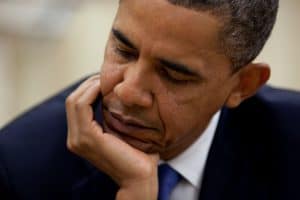 Obama reminds the crowd that he was the first President to openly shed a tear after the Sandy Hook massacre but when challenged that he was often too aloof and professorial, he stutters and those “ums & aghs” which were always a problem without the autocue become more noticeable.

“Does anger count?” Trump asks the judge. She confirms that it does. “No one does anger like The Donald!” he pronounces.

Donald goes further holding up a picture of the January 6th Insurrection Shaman ‘Look at the anger on his cute little face!’ 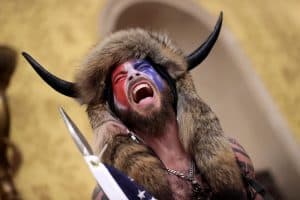 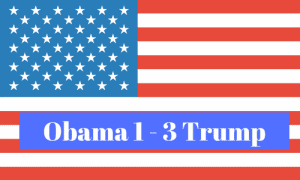 Obama looks nervous but calm. They don’t call him “No Drama Obama” for nothing!

(When you are ready to start working on your communication skills, remember to take my FREE Workshop)

Trump goes on the offensive. I’m the biggest star in the world, he claims. Look at what happened to The Apprentice after I left. Love me or hate me, people can’t ignore me.

Obama counters that he has a better walk, a better voice, a better smile, is better looking, and has cooler celebrity friends, like George Clooney and Little Prince George. Who has Trump got? 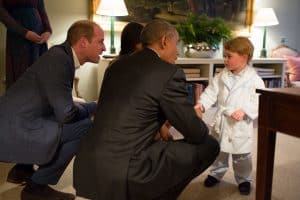 Balancing Trump’s celebrity against Obama’s cool, he calls this one a draw. One point each. 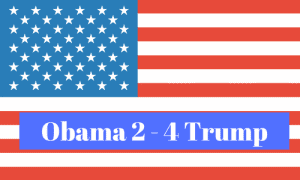 ROUND 6: ELOQUENCE AND ARTICULACY

The judge interrupts Trump before he even starts speaking and gives this round to Obama without contest. Trump looks to Brett Kavanagh for support but he’s on his 5th beer (cos he likes beer) and doesn’t even notice. 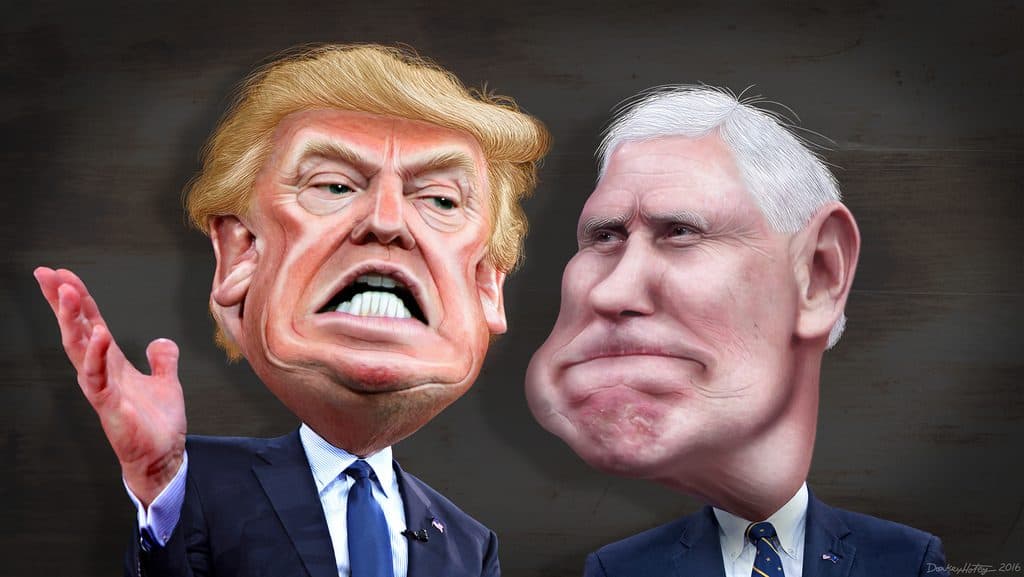 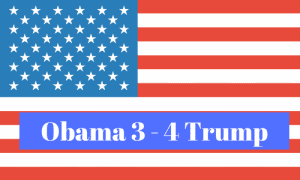 ROUND 7: USE OF HUMOUR

Trump points to the jokes he has made at his opponent’s expense like “Crooked Hillary and Little Marco” but Judge Roberts reminds him that he too cannot use the same argument twice.

Obama looks confident. “Judge Roberts”,remember my White House Correspondent’s Dinner Speech in 2015. It’s the funniest speech ever given by a President. And check out the jokes I made about Donald.”

The Judge calls this round for Obama. He’s pulled level. 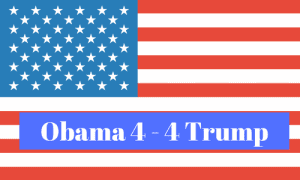 ROUND 8 (TIE BREAKER): ABILITY TO INSPIRE

Joe Biden gives Judge Roberts the nod and so he announces that the country needs to move on so this needs to be a tiebreaker.

Trump goes first: He’s the most inspirational leader of all time, he claims. He won the election and he would have won the popular vote too if it hadn’t been for all those immigrant voters. They love him in Mexico. They love him in Russia. They even love him in Kenya (the white guy holding the “Blacks for Trump” sign shakes it to catch the attention of the cameras).

In fact his people love him so much, they stormed the Capitol for him. They’re willing to refuse to take the COVID vaccine and die for him.

Donald can’t understand why this isn’t a slam dunk argument for him.

Obama is quiet. Does he have no response? Is he losing his edge? Has Trump finally destroyed his legacy?

No! Cool and calm, he begins to speak in his trademark baritone.

Obama: “Now, I’ll admit that Don’s got game. His people love him without question. He could shoot someone in the middle of Times Square and they’d still vote for him. But Don, if I can prove to you without saying a single word that I inspire more people to follow me, will you concede?”

Trump (senses a trick, but his ego gets the better of him): “Sure, but it’ll never happen”

No Drama Obama smiles then slowly points up to the big screen. Everyone turns to look up. And there it is… 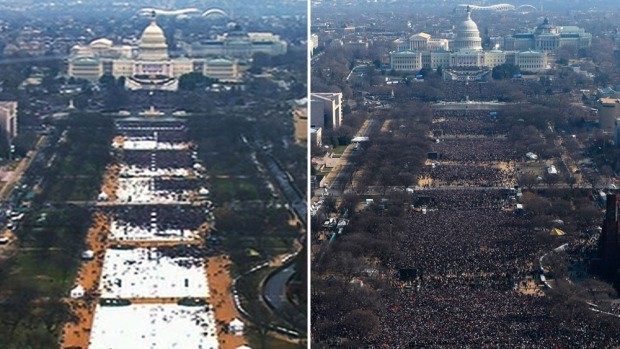 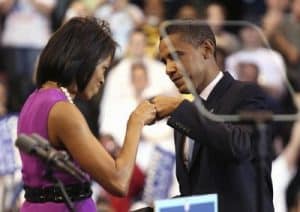 Michelle jumps in the ring and fist-bumps her husband. Fox News describes it as an Islamic terrorist greeting and then stop their coverage.

Judge Roberts declares “And the winner is… BARACK HUSSEIN OBAMA!” 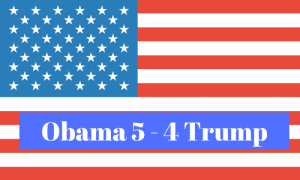 But in an apparent gesture of sportsmanship Obama heads over to Trump to shake his hand “Great Fight, Donald. Great fight. Hey, listen. The country’s divided. No one can get anything done. What say we put this rivalry behind us and come together for the good of the country?” 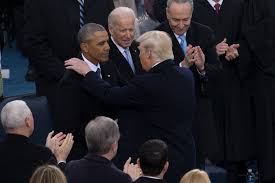 Donald considers for a moment, whispers something to Barack and then walks off in a huff.

Joe Biden leans over to Obama

Obama replies: “something about fraud, recount, and CNN. Didn’t really get it”